Size of font: A A A
Interval: AАА AАА AАА
Background: A A A
Type of font:
Picture: Off black on white Color

State Flag of the Republic of Kazakhstan 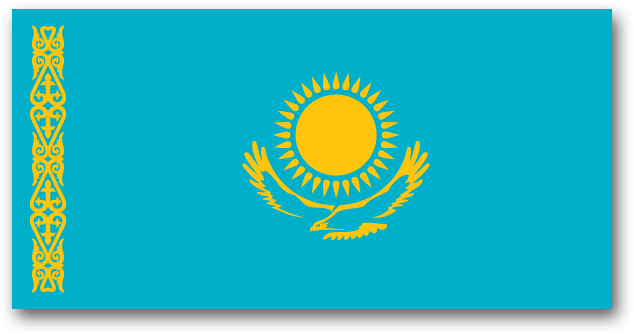 National flag of the Republic of Kazakhstan represents a rectangular cloth of blue color with the image in its center of the sun with 32 beams, under which – a soaring steppe eagle. At a staff there is a vertical strip with a national ornament. Images of the sun, beams, eagle and ornament are of gold color. The ration of width of the Flag to its length is: 1:2.

The blue flag with a golden national ornament on the left, the golden sun and a soaring silhouette of an eagle in the center today decorates office buildings in the republic, flies over buildings of embassies of the sovereign Kazakhstan in the foreign states, is established near the building of the United Nations Organization. It nowadays is perceived by all as a symbol of freedom, independence and sovereignty of our republic. Its author. This our new symbol is the result of the work and creative search of Shaken Niyazbekov.

The main element of national flag is its color. Light blue color is among the colors that have been widely used for a long time by mankind as one of the bright, expressive and pleasant colors. This is not by accident. After all, this color prevails in the nature. It is one of the seven sacred colors of the rainbow. It is the color of the sky and water.

Internationally, it is necessary to treat the policy of the country that has chosen a light blue flag as a symbol of the statehood with the greatest confidentiality and understanding. Thus, pure blue color of our flag testifies to cultural and ethnic unity of the people and at the same time points to the idea of indivisibility of the state.

It is not fortuitous that upon close examination sun beams in our flag at the same time have a grain shape – affluence and prosperity bases.

In world outlook of nomads the special place is occupied by a steppe eagle or a golden eagle. Its image in the coats of arms and flags of the people and ethnic groups inhabiting Kazakhstan has old tradition. In the language of symbolics the silhouette of an eagle means the government, breadth and sagacity. For inhabitants of steppe regions this is a symbol of freedom, independence, pursuit of ambition, achievement, trip to the future.

At the same time, an eagle, having powerful force, can hold his own against anyone who tries to deny its future. The silhouette of an eagle originated from the idea of young sovereign Kazakhstan of search for the heights of a world civilization. One more element giving novelty and originality to our flag is the strip parallel to its staff, consisting of a national ornament. Here the Kazakh ornament “koshkar-muyz – sheep’s horns” is depicted.